How everything began- the legend:

Bungy Jumping originated hundreds of years ago on the Pentecost Islands on Vanuatu: legend says that a wife who repeatedly was mistreated by her husband one of these days fled again from him: however this time she climbed to the top of a high tree and dared him to follow her! Before he caught up  she jumped off the tree not forgetting to tie vines to her ankles! Landing safely on the ground she accused him to be a coward and – in rage- he had not seen the vines ………he jumped into his death…..

In order to memorize this happening the women there  started to imitate this jump in an annual event…..as time passed men more and more  joined and finally  took over this ritual!    Since then they jump from up to 35m high wooden towers which they build themselves:  these towers are “divided” into twelve sections which each represents a part of the human body, the highest of course the forehead! Depending on age and  courage  the participants  choose the height of their „take off“:  tied to two vines which had to be found in a crucial process they jump into the depth.

Before each jump the crowd performs a ritual to encourage the jumpers  for the goal is to come as close as possible to the softened ground or even hit it.

Annually in April men not only ask for a good harvest but also proove their heroism –especially to the village women- participating in this tradition! 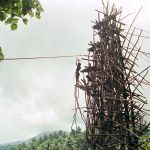 It does not seem to be a coincidence that this strong ancient ritual inspired the „Oxford University Dangerous Sports Club“ to start experimenting with rubber bands;  eventually the first bungy-cord was developped!

It was in 1979 when these guys imported this ritual into the modern using their precious cord to dive off the  „Clifton Suspension Bridge“ in Bristol, GB!

So it should last until 1986 when he told his friend AJ Hackett about his bad experience: they decided to restart.

In June 1987 AJ did the first internationally famous Jump from the Eiffel Tower in Paris a year before they opened the first bungy-site in Queenstown,New Zealand: rumours say that the tremendous amount of 28Jumpers used this adrenaline-facility during the first year …..since then millions of jumps have been done worldwide!! 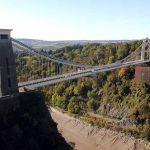